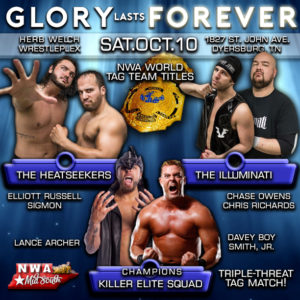 The NWA Mid South Championship Committee has been working closely with Branch Manager Jon Michael to put together a Pro Wrestling Supercard for October 10th that will blow the fans away! It is quickly shaping up to be a monumental evening with two big title matches already signed for that evening! Check it out below-

*We do not envy the referee that is assigned to officiate the Triple Threat Match for the NWA World Tag Team Championships! Whomever it will be will definitely have his hands hands full! The current champions, Killer Elite Squad(Davey Boy Smith, Jr. & Lance Archer), will be defending the most prestigious titles in all of tag team wrestling against the co-#1 contenders in The Heatseekers(Elliott Russell & Sigmon) and The Illuminati(three time NWA World Jr. Heavyweight Champion Chase Owens & Chris Richards)!!! These are six of the very best competitors that this sport has to offer!

Title vs. Title, WINNER TAKE ALL –

*The “Ironman” Rob Conway will be returning to The Herb Welch Wrestleplex to put his NWA Mid South Wrestling Unified Heavyweight Championship up against the NWA Southern Heavyweight Championship currently held by “The Golden Boy” Greg Anthony. Anthony is a member of the most elite group in all of Pro Wrestling, The Empire. You can bet that their leader, NWA Western States Heritage Champion “Loverboy” Matt Riviera, has given instructions to “The Golden Boy” to not only take Conway’s title but to also cripple him with the Figure 4 Leglock! But, we can assure you that it will be no easy feat as the “Ironman” is a two time NWA World Heavyweight Champion! This encounter carries with it a “Match of the Year” quality! The victor will walk out with two of the most coveted championships in the “Sport of Kings”!

More matches will be announced this Saturday night, October 3rd, at our weekly event at The Herb Welch Wrestleplex, located at 1827 St. John Ave. in Dyersburg, TN! Bell time is 7:30pm and tickets are $5! #HistoryIsHere