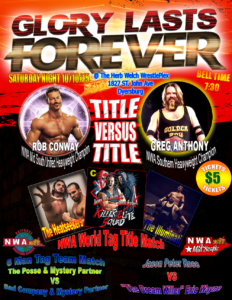 – The Posse and the NWA Mid South Tag Team Champions Bad Company have been embroiled in a bitter feud for months that started over the titles, but, has since devolved into nothing except pure hatred for each other. They’ve fought in several big championship matches as well as traded the belts back and forth on several occasions. On October 3rd, Simon Reed of The Posse and Van “The Man” VanHorn faced each other in a Grudge Match of epic proportions. The match ended with no clear winner. As a result, Branch Manager Jon Michael made an on the spot decision to have both teams find their own Mystery Partner for a Six Man Tag Team Match for last night.

Bad Company convinced “Drop Dead” Dale Wylde to join their team and The Posse were able to recruit The Handsome Stranger to join their team. It was a wild encounter on all sides throughout the match. In the end, The Handsome Stranger hit the Reverse DDT on Dale Wylde for the win! We guarantee that this is not the last encounter between The Posse and Bad Company!

– “The Enforcer of the Empire” Tim Storm defended the title last night against “The Main Event” Nathan Briggs. Nathan Briggs is a top star from NWA Top of Texas in Amarillo, TX. As the evening began, Briggs was quoted as saying that he would push Tim Storm to the limit in their match and he ended up making good on his promise. At one point it seemed as if he would become the new champ as he had a flawless Scorpion Deathlock applied to Tim Storm in the middle of the ring after slamming Storm’s leg into the ring post! But, Storm was able to make his way to the ropes and as a result, NWA Senior Official James Beard was forced to make Briggs break the hold. From there, Storm and Briggs battled it out in heated fashion. Tim Storm then proved why he is known as one of the strongest & toughest men in Pro Wrestling when he lifted Briggs up to hit his finisher, the Perfect Storm, to retain his title!

– Jason Peter Rose was fresh off of his defeat of Jeremy Moore in an “I Quit” match on October 3 when he was signed to face his former tag team partner “Dream Killer” Eric Wayne at last night’s big event. JPR is trained in the martial art of Jujitsu and E These two men have traveled all of the Midsouth area together in years past before breaking up and facing each other in matches on a number of different occasions, most recently in Union City, Tn for an NWA Mid South event. Last night they climbed into the ring to stand across from each other & were prepared for battle like two Roman Gladiators in the Coliseum!

They punched, kicked, and plain out just fought each other like they’d always been bitter enemies. But, Jason Peter Rose was the one with his hand held high in victory when the smoked cleared on their match after pinning the “Dream Killer” with a schoolboy roll-up pinning maneuver!

– As noted above, last night was the first time in which “Big Time” Josh Lewis has ever competed in an NWA Mid South ring. He made an impact by leveling EMT #1 with a ‘Rude Awakening” style Neckbreaker!

– The Heatseekers(Sigmon & Elliott Russell) had laid out a challenge to then NWA World Tag Team Champions,the Killer Elite Squad(Davey Boy Smith, Jr. & Lance Archer), months ago after being named the Number One Contenders by the National Wrestling Alliance Championship Committee. They finally got their answer about a month ago when the Killer Elite Squad answered their challenge for a title match, which was then awarded to NWA Mid South Wrestling by the NWA Board of Directors after much discussion amongst the board members about where to hold this match. However, it was not to be a classic tag team match as The Illuminati(“The Crown Jewel” Chase Owens & Chris Richards) inserted themselves into the title picture by petitioning the NWA Championship Committee to add them to the match. It should be noted that the Heatseekers and The Illuminati have been warring with each other for months at events NWA Smoky Mountain Wrestling in Kingsport, TN.

NWA Senior Official James Beard was assigned this important match by the President of the National Wrestling Alliance, Bruce Tharpe. Each team made their entrance into an electrified Herb Welch WrestlePlex and prepared for the match of a lifetime. The rules stated that any man could tag anyone into the match at any time. Also, the champions did not have to be pinned or made to submit in order to lose the titles.

In the opening minutes of the match, Lance Archer of the Killer Elite Squad tried to use his impressive height of six foot and six inches to intimidate Sigmon of The Heatseekers. However, Sigmon is not afraid of any man and did not hesitate to take to fight to the big man from Dallas, TX! Throughout the course of the match, the Illuminati’s Chase Owens & Chris Richards kept tagging themselves into the ring in an attempt to do two things- keep the Killer Elite Squad out of the match and wear down both of The Heatseekers in order to try to win the match.

Eventually this proved to be a losing strategy for The Illuminati as the Killer Elite Squad’s Davey Boy Smith Jr. and Lance Archer stampeded into the ring and laid waste to everyone in sight. Neither one of the two men bothered to legally tag themselves in however. Therefore, that left am opening for Chris Richards to take out both members of the Killer Elite Squad, eliminating them from the ring in the process. Richards then attempted to charge Sigmon who low bridged the giant of The Illuminati. Sigmon then took his shot & delivered a Flying Headbutt to Owens for the 1-2-3!

The roof was blown off of the Herb Welch WrestlePlex as Referee James Beard raised the Heatseekers’ hands in victory! We congratulate the new champions and will welcome them back to Dyersburg this coming Saturday night to, October 17, for their first title defense against The Empire’s “Loverboy” Matt Riviera and “The Golden Boy” Greg Anthony! The Empire would love nothing more than to add NWA World Tag Team Gold to their treasure chest as Riviera is now the NWA Western States Heritage Champion and Anthony himself is the holder of both the NWA Southern Heavyweight and NWA Mid South Unified Heavyweight Championships!

The NWA Mid South faithful were witness to a great match as the two men proved that they are indeed two of the very best in the “Sport of Kings”! Two time NWA World Heavyweight Champion Rob Conway did not waste any time as he knows that Greg Anthony is a member of the most elite group in Pro Wrestling, The Empire. Anthony is a calculating competitor that knows where he’s at and what he is doing at all times. “The Golden Boy” zeroed in on the “Ironman’s” left leg for most of the match. He went so far as to use the Figure 4 Leglock in an attempt to shatter his opponent’s kneecap.

However, Conway showed the crowd why he’s known as the “Ironman” when he reversed the Figure 4 and put the pressure on the legs of “The Golden Boy” Greg Anthony. Just as it looked as if Anthony would submit to the “Ironman”, he let go of the hold and went for it again only to be rolled up in a Small Package pinning maneuver by Conway for a very close two-count. Anthony then headed to the top rope only to be press slammed off of it by Conway who then went for his patented “Flat Iron” and got a close two-count.

At this moment, Tim Storm made his way to ringside to seemingly cheer for his Empire teammate. Conway then signals to the crowd that he’s going to spear Anthony for the 1-2-3, but, before he could pull it off Tim Storm pulled him from the ring. Storm then lays out the “Ironman” and tosses him back in the ring where a waiting Greg Anthony executes a perfect “Midas Touch” stunner to win the match and subsequently become the owner of two of the most prestigious belts in all of the National Wrestling Alliance, the NWA Southern Heavyweight and NWA Mid South Unified Heavyweight Titles!

Storm and Anthony then proceeded to beat up Rob Conway. Before this could happen, Elliott Russell and Sigmon of the NWA World Tag Team Championship Heatseekers saved the “Ironman” from the clutches of the dreaded Empire! Branch Manager Jon Michael then made his way to ringside to inform Tim Storm that because of his interference in Rob Conway’s match that he would defend the NWA North American Championship against the “Ironman” this coming Saturday night, October 17!

Remember that if it’s not the National Wrestling Alliance then you’re not watching the absolute best in Pro Wrestling! – NWA Mid South Wrestling Announcer Douglas Hart