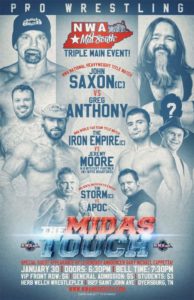 NWA Mid South & the National Wrestling Alliance Championship Committee have worked hard to put together a fantastic card of great Pro Wrestling action! Check out the lineup below! NWA Mid South Announcer Douglas Hart has all the info you need to know!

John Saxon won his coveted title several weeks ago in a Battle Royal at The Herb Welch WrestlePlex by throwing “The Golden Boy” over the top rope last! The NWA Championship Committee wasted no time in awarding Greg Anthony a match for the title as they feel he is the Number One Contender to the NWA National Heavyweight Title!

This will no doubt be the biggest match in the fifteen year career of “The Golden Boy”! He is primed & ready to capitalize on this opportunity. However, John Saxon’s ring moniker isn’t “Battleborn” for no reason. He’s one of the toughest around & shouldn’t be underestimated for any reason.

The Iron Empire won the NWA World Tag Team Titles at NWA Mid South presents Wrestling at Resorts Casino in Robinsonville, Mississippi on December 4. Since winning, they’ve been besieged with requests to defend the belts & decided to grant the first defense to NWA Mid South Unified Champion “The Epitome of Sports Entertainment” Jeremy Moore & a Mystery Partner of his choosing. Jeremy Moore has been unstoppable since defeating Greg Anthony for the title at “The Winter Classic” back in December. He has vowed to etch his name in the history books by winning the NWA World Tag Team Titles, but, Matt Riviera & Rob Conway were already two of the most skilled tag team competitors even before they decided to team up in the mutual quest for tag team gold.

-“The Enforcer of the Empire” Tim Storm(c) vs. Apoc

This isn’t the first time these two have met for the NWA North American Heavyweight Title in an NWA Mid South ring & if their past encounters dictate the future you can be rest assured that no matter who wins it won’t be the last!

There will be several more matches to take place!