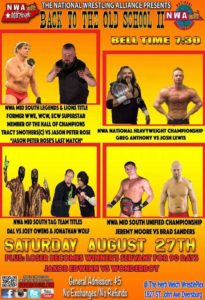 Chairman Minnick stated that if “The leader of the Blue Collar Mob” did in fact defeat “The Wild-Eyed Southern Boy” for the NWA Mid South Wrestling Legends & Lions Championship then he would be required to surrender it to Mr. Minnick so that a One-Night-Only tournament can be held in Ripley, TN.

This ruling was made due to the fact that Jason Peter Rose told NWA Mid South Wrestling & our fans that his match against Tracy Smothers would be his last as he will retire from in-ring competition following the match’s conclusion this Saturday night, August 27, at Back to the Old School 2.