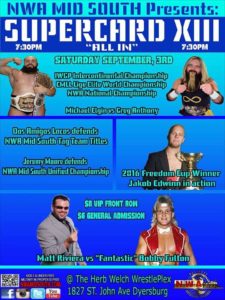 #SupercardXIII:All In is this Saturday night at #TheHerbWelchWrestlePlex at 1827 St. John Ave in Dyersburg, TN! This event features a battle over three of the most prestigious Professional Wrestling Championships in the business today!

When these two men square off against each other in the C&C Pharmacy Main Event, it will be for all the marbles as all three of the aforementioned championships will be on the line!

-2016 Freedom Cup winner & your candidate for NWA Mid South Wrestling Rookie of the Year Jakob Edwinn will be in action!