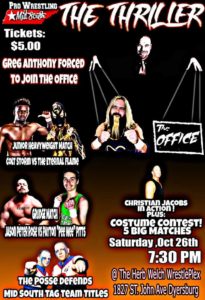 Last saturday night at Glory Lasts Forever V, we saw The Posse defeat the team of Brandon Ray & Terry Wayne to win the Mid-South Tag Titles, The Eternal Flame also won a #1 Contenders Match to become the #1 Contender for the Southern Junior Heavyweight Championship, the returning, Jason Peter Rose, was disqualified in a match against Payton “PeeWee” Pitts, Jon Michael answered Meklakov’s Puny American Challenge and won by pinfall, “The Golden Boy” Greg Anthony took on Christopher White in a Winner Takes All Dyersburg Street Fight, with the stipulations being that if Greg Anthony wins, Christopher White would be banned from Pro Wrestling Mid South forever BUT if Christopher White won, then Greg Anthony would be forced to join The Office, and with a surprise assist from Thud Powell, Christopher White won by pinfall, for the C&C Pharmacy Main Event, “Drop Dead” Dale Wylde defended his Unified Heavyweight Championship against the returning Christian Jacobs, and as many saw, Christian Jacobs was very close of winning when all of a sudden, Christopher White brought The Golden Boy out and forced him to kick Christian Jacobs in the face BUT as Dale Wylde began to get up, Greg Anthony hit Dale with a spear, leaving both competitors down, even after all that had taken place, Dale Wylde still stood tall as he retained his Unified Heavyweight Championship. Tonight in Dyersburg, TN at The Herb Welch Wrestleplex, we present The Thriller 2019, where we hope unanswered questions will be answered.