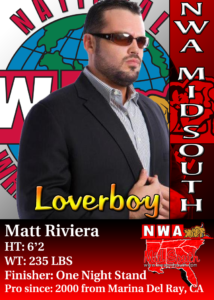 Quite possibly the most polarizing man in pro wrestling today. The Loverboy Matt Riviera is a bona fide ladies man and with his talents in and out of the ring has been sought after by both promoters and fans alike. His appearance on reality TV shows like Megan Wants A Millionaire and Millionaire Matchmaker have helped him make himself and his company Traditional Championship Wrestling household names. His formation of the mysterious group The Empire has made many conspiracy theorist very alert that there might be more than meets the eye. Matt often tags with fellow Empire founding member Greg Anthony and the two have been very successful winning tag team titles all over the country.